We just turned 1 year old!  Woot!  Hosting the blog has been a fun, creative outlet so far.  It turns out that “Black Trekkies” is the top search term that is leading people to find the Black Trekkie blog.  I knew we were out there!  And, it appears that we are searching for one another.  It’s been a fun year and we have bigger and better things planned for the future.

SO…if you happen onto this blog and find it funny and/or interesting, become a guest poster. If you just want to hang, leave a comment and subscribe.

I’d love to have more activity on the blog and offering alternative insights into the Trek would be great.  And, please post comments and follow Black Trekkie.  Every click gets us a little closer to the Delta Quadrant.  Just kidding, it just lessens the distance between us.

We can even have an awesome Gorn/Kirk-style play fight.  We’ll figure out what the fight was about later.  Keep checking in, I’m looking to hear from you!

So, the numbers are in on “Star Trek Into Darkness” and they aren’t as good as the opening for Iron Man 3.  Come on, y’all.  Was I the only one who saw the dreck that was Iron Man 3?  It was like cold pizza; in fact, it was like cold, 10 for $10 pizza.  And, Iron Man didn’t even do half of the upfront trailers and promotion that Star Trek did!  Iron Man couldn’t have been more accessible to the masses than this Star Trek.  Maybe, it was because people love Robert Downey, Jr?  But, let’s face it; for all my critique of “Star Trek Into Darkness,” it was still a muuuuuuuch better movie.

Did Paramount get it wrong by doing all these sneak previews and opening internationally first?  I think so.  The international opening is less of an issue than the sneak previews.  It seemed like people were seeing the movie a week before it opened and I think that made people forget what weekend it actually opened.  After seeing all these reviews pop up, I had to check to see whether I had missed the opening.  Yes, ME, Captain Jackson.  So, you know if I almost missed it, people who didn’t care definitely missed it.  I think the studio also screwed up on basic playground psychology– people like to be first and, if they can’t be first, they lose interest.  After seeing all these reviews and feeling like they weren’t in the in-crowd, a lot of people who were looking forward to the movie probably said, “Eh, I’ll get around to it.”

We can’t discount the fact that, despite having the same rating, Iron Man seems like a much more family friendly movie.  Do you want to have to explain death to your children after seeing Star Trek or do you want to explain all of Tony Stark’s sexual innuendos to the kiddos?  Toss up.  I hadn’t thought about it, but does anyone actually die in Iron Man?  The reboot of Star Trek didn’t have to be like this, but I guess that was a calculated decision by the studio.  I wonder if they regret it a bit now.  Here’s why you have to see Star Trek anyway:

Nerds lose.  And, we have to win.  Arguably, Tony Stark is one of the smartest people alive, but his persona is much about self-interest, bling, and glitz.  He doesn’t really know how to work in a team.  Even though he has renounced his ‘lord of war’ ways, he still has all the treasure that came from that life.  Star Trek is about teamwork.  The team is ordinary, not of any extraordinary superpower or superintellect; they work harder.  That’s the secret sauce in the Star Trek Universe and real life.

END_OF_DOCUMENT_TOKEN_TO_BE_REPLACED

Ok, read my review below and, then, watch this video.  Black Trekkie has a good sense of humor and I totally resemble the Onion’s remarks.

I have been debating whether to share this or not, but I decided to go ahead and put this out there.

*If you have seen the trailers, you have basically seen “Into Darkness”.*

I was actually pretty shocked by this when I saw the entire movie.  I wish they hadn’t shown quite so much and they weren’t as much trailers as they were entire snips of the movie.

I’m listing them below, BUT, if you haven’t seen a trailer for a few weeks, then don’t watch them before going to see the movie.  Ok?

You remember back in the day when we were young (I’m not a kid anymore, but some days…), ubiquitously, you remember a scene where everyone gathered around the kid with something cool to show off.  It might have been the new Jordans, a turtle, a cast, a nudie mag, or the latest New Kids on the Block cassette tape; who knows, but it was always the same scene.  Well, gather round me today on our virtual playground because: 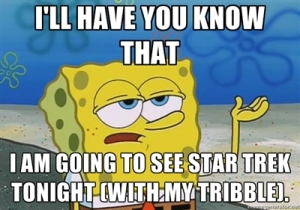 This is my reaction!